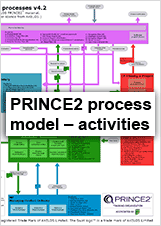 This diagram shows the PRINCE2 process model, including all 7 processes, the activities and triggers. It also shows the PRINCE2 management products and in which process they are created, updated, reviewed and approved.

The diagram does not show the details of where every management product gets updated, because the diagram would become too complex by doing this. Instead, the diagram focuses on where the products are created, reviewed and approved and the most important updates.

A trigger in PRINCE2 is an event or a decision which triggers one of the 7 processes. Triggers on the diagram are shown by a pale grey lozenge shape. Each trigger has a name and an arrow attached to it. The direction of the arrow shows which process is triggered.

Inside each process rectangle are a list of outputs with letters after them. The letters indicate what happens to each output as follows:

A – the output is approved in the process

C – the output is created in the process

R – the output is reviewed in the process

U - the output is updated in the process

Some of the outputs have an asterisk (*) after them. This indicates that the output is not one of the PRINCE2 management products.

Attached to some of the triggers are coloured swirl shapes. These are meant to indicate the outputs which are used as inputs into the next process. The shapes contain numbers which indicate the outputs concerned and the colour of the shape indicates from which process it is an output.

This diagram should be viewed in conjunction with the chronological view of the PRINCE2 process model which can be found here.